Our first endeavor was to find suitable volunteer from first week of April 2019. We nearly reached 140 persons  for this pioneer work.  Out of 140,  only  44 person gave their consent to be volunteer. We screened all 44 persons to find out a typical / good quality sperm parameter. Out of 44 we selected only 20 person  to know the “Effect of diet on sperm production & sperm quality”. Every one  of them was between age group of 22 years to 30 years and unmarried.  The selected person had normal life style and  average body weight. All selected 20  volunteer was explained  the procedure and requested for their full co-operation. All of them offered their full co-operation and  verbal consent.

History of diet and sperm quality :–

Three to four decade back  our food had less calorie in contrast with our present eating regimen.  Even previously people ware used to do lot of  physical work. Hence burning lot of calorie.  But now a days it is reverse.  We eat more and burn less.  This idea gave us an idea to conduct a study on “Effect of diet on sperm production & sperm quality”. 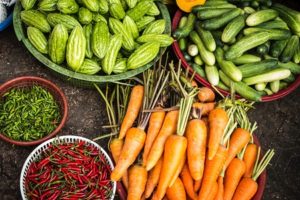 We requested all volunteers to carry on their normal  work schedule.  Some light  workout (brisk walk) in the morning in their daily schedule was added , provided they were not doing it.  We also requested them to have minimum seven hour sleep. Additionally we suggested all of them for one hour sleep in after noon. We humbly requested all volunteer to not leave during the tenure.

Moreover we requested all volunteer to maintain abstinence for 3 to 5 days. It means not less than three days & not more than five days. We fixed the semen collection day Sunday only.

All volunteer requested to pursue strict diet regimen given to them. We tried our best to incorporate locally accessible & seasonal food. The whole day calorie managed to be near by 1600 to 1800 Calorie. Meal was divided in four parts. In between meals volunteer were proposed to take plane water, water with freshly cut & squeezed lemon, soft drink with no calorie , black tea, etc. . Which is Calorie free. Their meals contain lot of fiber. Additionally we attempted to limit carbohydrate in their diet somewhat.

All selected donors well screened clinically and basic investigation of blood & urine was performed. Ultimately we collected semen from selected donors for semen analysis. We planned to collect the semen on every Sunday for evaluation. we choose Sunday  because of accessibility of volunteers.

We based our observation on following parameter during the study :—

Points to consider  —  following points kept under consideration during the study.

Result  :– We  clearly observed following points  during our study.

We reached at a conclusion at the end of study “Effect of diet on sperm production & sperm quality”. That diet control have a direct impact on semen quality of  normal individual. Diet control not only reduces weight. Rather it also improve semen quality.  It concentrate the semen. Increase the number of motile sperm in semen. Total sperm count (motile & non-motile) gave variable result, hopefully depending on person.

Conflict of interest  – No conflict from any source.

Acknowledgement – We , Frozen Cell Team” continuously trying to show a way for better fertility rate.  This study “Effect of diet on sperm production & sperm quality” is a part of our continuous endeavor.

Limitations – We have to trust on volunteer on many aspect. Therefore there is possibility of negligence or false information given by volunteers.

Funding – The study “Effect of diet on sperm production & sperm quality” was totally conducted by resources of Frozen Cell.   We did not obtain any financial support from any individual or organization.

52 thoughts on “Effect of diet on sperm production & sperm quality”